Anyone want a character planner?

Let me preface this by saying, i haven't coded in like a decade. Even back then i was novice at best. So this code is INSANELY bloated and messy.... but it works!

-- All code is on the one page. All java and css. Doesn't call to anything else except ionicons, which gave me the button icons for the list... that's it. So basically you can copy and paste the code and mess with it however you want, if you wish.

-- I have much to do in the way of ease of use, making it look pretty, adding skill details and all kinds of other plans... but the basics are here and functional (i think?)

-- I had to work around MANY problems while making this, so....
-- If a primary shows up twice, only the first will have working sliders - the 2nd will have the number from the first slider.
-- If a primary has more than 1 child, only the first will show the parents current value - BUT all will lock (or rubberband) back to the overall parents value.
So if Endurance is at 10, Active Regen can still be at 20.. but will only register @ 10.

I'm sure there's other problems i'm forgetting....
Let me know if you run into issues.

#2
Very cool, thank you.
The keyboard is mightier than the sword.
D

#3
Valhalo said:
Very cool, thank you.
Click to expand...
My keyboard is my sword, I'm a Key Warrior

#4
me is character planner

#7
Jybwee said:
http://mortal.epizy.com/tree.html​
Let me know if you run into issues.
Click to expand...
What a useful tool!

The minor (so far, inconsequential) issue I've run into is that since my Chrome browser uses HTTPS Everywhere, that extension issues its standard dire warning when I navigate to your page for the first time.

#8
This should be in Noblemen and wisdom Section ...
It's good to see Some Good thread's For a change .

I anchored a small window in the top right. ATM it just shows Pre-req details. - Not all secondaries have the pre-reqs shown

MAYBE in the future i can put in all the flavor text, but seems like too much work to be worth atm.

Next step is to try and add Str/Dex.. etc sliders that interact with the skills... That may take a LOT of thinking and coding so we will see...

At least it is slowly getting more user friendly

Well, Almost all secondary and primary skill pre-reqs should show up in the top right window. I say almost, because sometimes i can't see the pre-reqs

Almost every skill has it's own .html (that appears in that top-right window)... so i can add the flavor text somewhere down the line with 'relative' ease.... by relative ease, i mean insanely painful and tedious, but slightly less so.

I want to get the Attribute sliders working and have them alter the skill sliders but that is going to take some time. As mentioned above, i need to see every skill (at least) unlocked.

but there are (or at least were) some exceptions to that rule. Especially when you add the 'unknown' factor... which could mean either effect or no effect.

And just for fun... before i throw them out (like the other papers) - Here's some pics of JUST the pre-req of secondary skills paperwork to give you an idea of how i work. I love to work with pen and paper and handwritten notes and typing things in myself... this (of course) leads to mistakes. So please, at this point, let me know of any mistakes or ideas of how to make this better.

LAST thing i want to do is have a small mistake in here that will cause someone to create a character and a month down the line realize they can't do what they build in my skill builder... Please let me know if you see any mistakes.

Also, I've tried to add graphics and liven it up a bit, usually failing... but am open to all ideas.

Oh! also, i made a Primary only tree. This is for players that have built so many characters they only want to tweak small things and already know all child skills and secondaries.... anyway, if you want it -
http://mortal.epizy.com/PrimeTree.html


EDIT: Seems it's more like a skill with 2 attributes contributing is 0.5 per 10 points... instead of 1 skill point per 20 attribute. Small but very important difference i had very wrong. 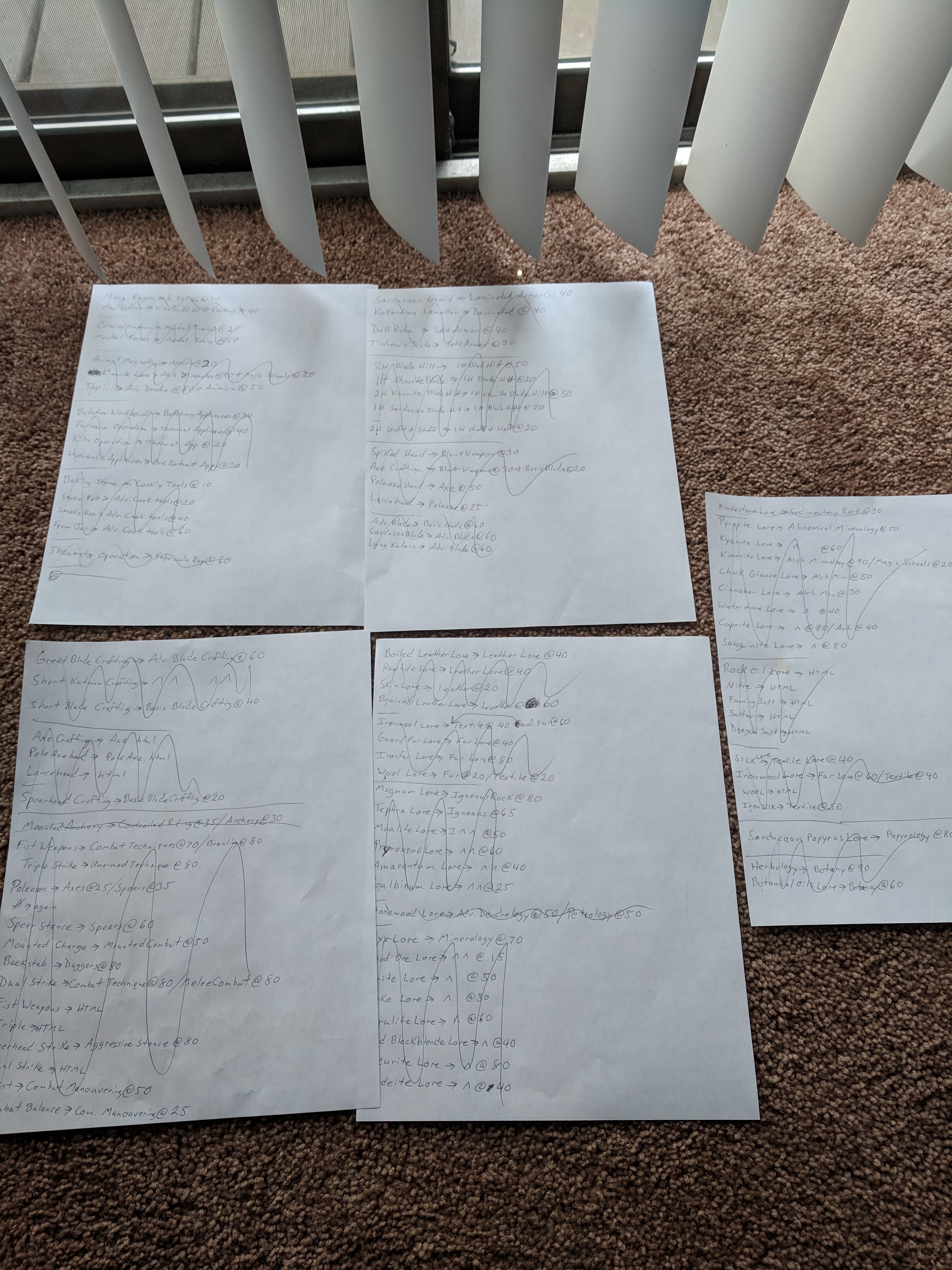 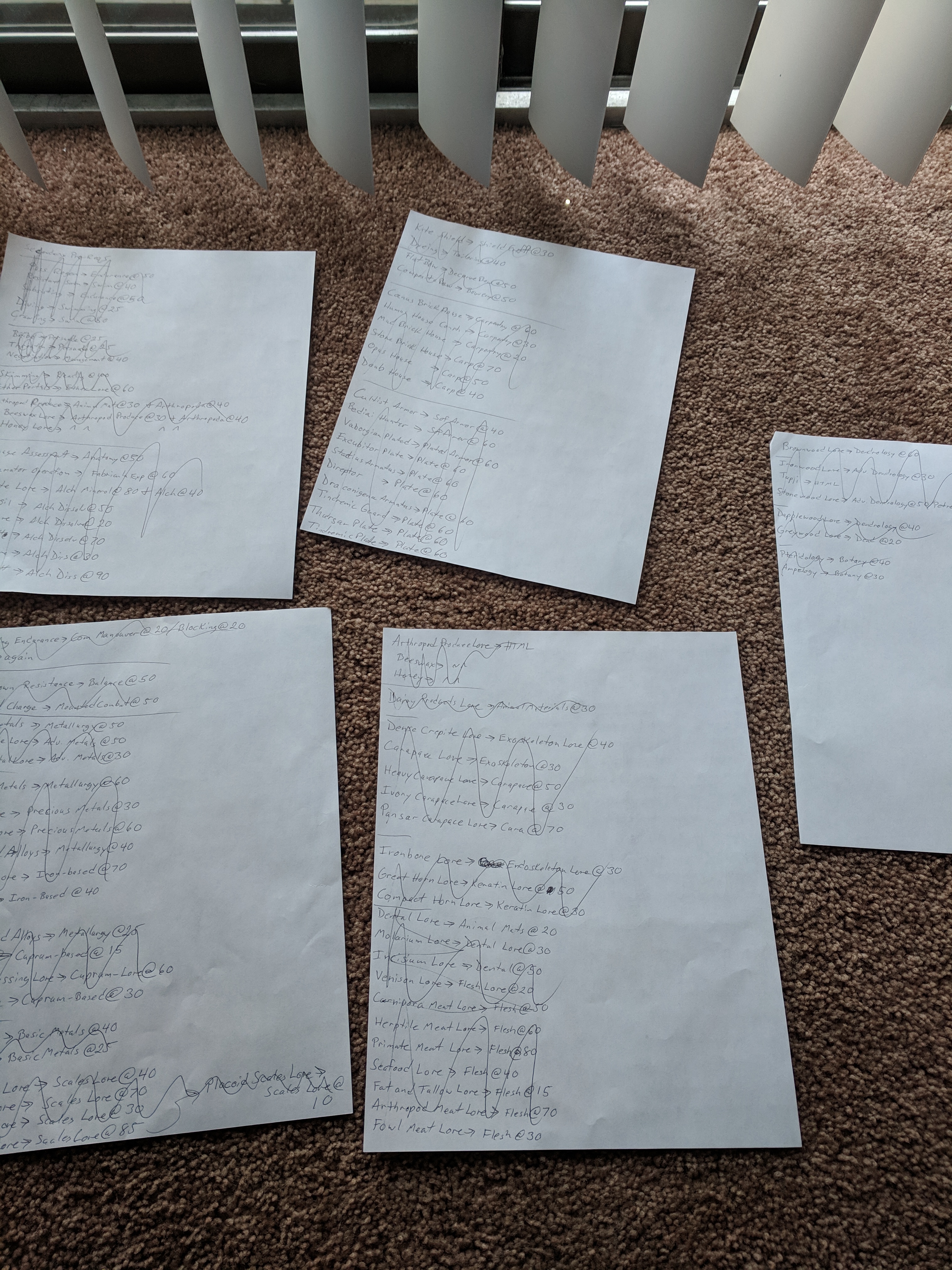 #13
barcode said:
quit killing trees
Click to expand...
Probably-- possibly-- you come closer to not killing trees by recycling paper than by storing stuff on a server somewhere-- some of the time-- but way to focus on the least detail of the process, instead of the product.

It is absolutely the best current Character Planner, as I look around and do not see another that is competing.
[AI]LonaMacta#0102 on Discord | [FORM] | @twitter
READ ABOUT: ⋄ Soldeus ⋄ MO2 ALPHA History - MO1 History by Aegis Imperium
« Si oblitus fuero usque ad finem omnia opera eorum »​

#14
Najwalaylah said:
It is absolutely the best current Character Planner, as I look around and do not see another that is competing.
Click to expand...
where did you see me criticizing the planner itself? also the data will have to be on the server anyway, i'm just saying input it there rather than doubling the effort and making a carbon foam based middleman that needs to be disposed of

#15
Awesome tool, it has made getting back into the game a lot easier for me, thanks a lot! By the way I've notice that most of the skills under Melee Combat don't add up to the total skill number (except Lances, Brawling and Unarmed Technique, which work fine). Thanks again for your effort!

#16
19xino96 said:
Awesome tool, it has made getting back into the game a lot easier for me, thanks a lot! By the way I've notice that most of the skills under Melee Combat don't add up to the total skill number (except Lances, Brawling and Unarmed Technique, which work fine). Thanks again for your effort!
Click to expand...
Thank you for telling me!

In my very orderly system of crossing things off a pen and paper list... i missed everything in between the 2 "unarmed tech" sliders LOL... Was an easy fix tho.

Should be updated now on the main tree.